All Praise to the Whore

The red-light shines upon the oldest human craft on earth; in this particular point you may believe the infamous vernacular. (The oldest, that is, apart from politics, the police and martial arts – not to mention flint and plough and the civil work-slavery all the way to the assembly-line). But please! What is it they want us to believe these days? Society, we're told, has become a bit more tolerant, and so the whore has become a somewhat more respectable (or at least less despicable) person than she was at times. Has she? Sure, one of every four German males is a regular client, according to latest statistics. But what man in a respectable position will stand up in front of his assembled colleagues and superiors, his mother, his father and all the various elders, and proclaim, beaming with delight, "My wife is a prostitute, practising with uttermost success, and that's how I love her with all my heart and soul!"

In fact not only prostitution is condemned as ever, but even more so the prostitute herself. And the true reason is no less appalling than it is depressing. Would a merciless world suddenly start having compassion for the victims of a miserable exploitation? By no means, if anyone ever believed it would. We are talking here about a grown-up woman in possession of herself, not the property of a criminal pimp and not a heroin addict in need of stuff. But the indictment just gets more stern, if she does it on her own responsibility. That's the decent seemly neighbour's point: he is no fool and for him the whore's motive can't be any less obnoxious than her daily undertaking. Yes, we smell the lewd and randy spirit of the decent seemly neighbour – and his resentment and envy: His scandal with the whore is that she likes to do it. That after all it happens of her own free will when she shirks her duty to earn a living in a decent manner, knowing that her slippery pleasure brings in more money than any honourable endeavour could.

This defamatory morality is still a much harder currency than any deplorable Human Right, and it is the revenge of a world which knows all too well (although it would never admit it) that prostitutes are utterly indispensable and that no society in history has been able to appease the animal between the legs without the prostitute's good graces. The hooker-fucker meanwhile, still not satisfied, calls for the stoning of his nurse. The hatred must have ascended from his emptied pockets.

Not that everybody has to consent that free-market intercourse should necessarily be the most serious threat to public health. What is beyond doubt is merely the fact that it is not the whore, but the needy client who carries the infection, and it is not the whore but rather the client's plight which brings about the social plague. It's a characteristic lie that in this particular business demand is created by supply.

The whore's daily scramble, one hears too often, colludes too often and eagerly with other contemptible habits. But isn't this just another tribute to the manners and the special trust-worthiness of the client? And if the kleptomaniac and pathological liar is Kathy the tailor woman and not Mary the whore, it is just Kathy who gets the blame, and not the whole profession.

On the other hand the whore – the honest one, well-understood, and not that other one who's also here among us – well, who indeed will throw the first stone? As she's the one who has to minister to this filthy world, you hardly can expect her to cure it, too. True, the red-light shines on earthly weariness and despair. But as Karl Kraus showed with regard to his fine hometown of Vienna a hundred years ago, it illuminates "the only institution of bourgeois society which is not rotten to the core". And the one and only thing an upright citizen should dare petition would be the prostitute's unconditional rehabilitation along with comprehensive reparations payments – for 10'000 years of slander and denial of basic rights.

To prevent a misunderstanding: not only a prostitute can be a good woman. But let's dream a moment of the day she wakes up to find herself a human being like any other – then very obviously, as in all professions, the true expert is the one who knows it best, who likes it most and who just can't get enough of it. Especially when it comes to money. 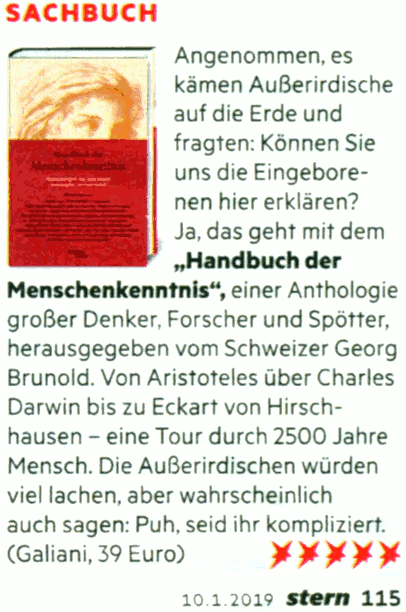